Men are from Mars and well, women aren’t. 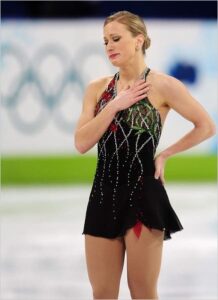 Catching some of the 2022 Olympic telecasts this week has me thinking about Canadian figure skating champion, Joannie Rochette.

Back in 2010, just two days before she was to compete, Joannie experienced the death of her mother.  Thérèse Rochette was just 55 years old.  She had a sudden massive heart attack just hours after arriving in Vancouver to cheer on her daughter.

Joannie was, as the CBC reported, the picture of ‘staggering grief and incredible grace’ but she skated a personal best and captured the bronze.  When she ascended the podium to accept the medal, Canada’s collective heart broke for her.

But here’s something equally as heartbreaking.  In the weeks that followed, Joannie found a piece of paper in her mother’s wallet that documented some symptoms that Thérèse had been having and was clearly concerned about: pain in her left shoulder, numbness in her hands, blurry vision and extreme tiredness.  Classic indications of an impending cardiac incident that often go unrecognized, undiagnosed or unreported.  Especially in women.

According to some 2018 research done by Heart & Stroke Canada, early signs of a heart attack in women are missed in 78% cases.  Yep – you read that right – 78% of the time, symptoms like the ones that Thérèse Rochette experienced (or others like shortness of breath, weakness, dizziness, nausea, fullness in the abdomen or jaw pain) are overlooked or misdiagnosed as heartburn, stress or anxiety, when in fact they are a significant cardiac event.

How does this happen?

I think, in part, it’s because women rarely think of themselves as candidates for a heart attack.  We think about cancer – and particularly breast cancer – being our biggest killer.  No one wants to get breast cancer for sure.  But we are 5X’s more likely to die from heart disease than from breast cancer.

Sometimes it’s women themselves who brush off their symptoms – I mean, how many of us are reluctant to take the time away from our family or job responsibilities to see about some vague symptoms like feeling tired or dizzy or even a heaviness in our chest?  If it were really a heart attack, we’d collapse next to our Peloton bike like Mr. Big did in the recent reboot of Sex and the City.  Or it would feel like the proverbial elephant on our chest.  Wouldn’t it?

Maybe or maybe not.  Despite what Biblical lore would have us believe – we did not spring from Adam’s rib and are therefore certainly not replicas of the internal male body.  Women’s bodies and how they work, including our cardiovascular system are different and misunderstood.

Our hearts and coronary arteries are smaller.  There are differences in the way atherosclerotic plaque builds up and differences in the electrical patterns of our hearts.  Our blood pressure and resting heart rate is generally lower than men’s.  And then there are fluctuating hormones, due to pregnancy or menopause or other woman stuff, that also influence cardiac health.

Women’s hearts are different than men’s and cardiovascular disease shows up a lot differently in the female body.  One descriptor is “men explode but women erode” as explained in this enlightening TED Talk by Dr. Noel Bairey Merz.

We have to take our own heart health seriously.  It’s as important as doing regular breast self-examinations and getting mammograms.  We need to take the steps to reduce our risks (which I am going to address in a separate post) and we need to get educated so we recognize the symptoms and we act without delay.

Most of all though we need to advocate for ourselves to get the best, speediest and most thorough diagnosis, care and rehabilitation because sadly, there is bias present at the physician and/or hospital level.

Aside from the potential of being sent home from the ER with a diagnosis of ‘heartburn’ when in fact it’s a myocardial infarction (MI = heart attack) in progress, less than one-third of women experiencing a heart attack get the same standard types of care within the agreed upon times set out in medical guidelines.  This includes getting an ECG and clot-dissolving therapy.

Additionally, the Global Registry of Acute Coronary Events (GRACE) which gathers info from 113 hospitals in 14 countries, including Canada, reports that women are less likely to receive beneficial cardiovascular medications or surgeries.

Furthermore, women are significantly less likely to be seen by a cardiologist or to be ushered into cardiac rehabilitative programming – which can result in a reduction (31%) of re-admission to hospital and a reduction (25%) of mortality.

And remember – this is just heart disease.  We haven’t even touched on stroke yet – which has its own sad saga of under-funding, under-diagnosis, under-treatment for women but significantly more deaths than men.

We have to do better.

For ourselves.  Our moms.  Our daughters.  Our partners.  Our gal pals.

Thérèse Rochette was just 55 years old.  She deserved to feel comfortable talking about her concerns, not squirrel them away on a scrap of paper in her wallet, and to get the cardiac support she needed.  She deserved to see her daughter win an Olympic medal and eventually graduate from medical school.

We all deserve to know the facts, so we are prepared to act.   Read about the signs and symptoms here.

And start talking more about cardiac health.  With every woman you know and care about.

The Canadian Women’s Heart Health Alliance ATLAS on the Epidemiology, Diagnosis, and Management of Cardiovascular Disease in Women – Chapter 2: Scope of the Problem