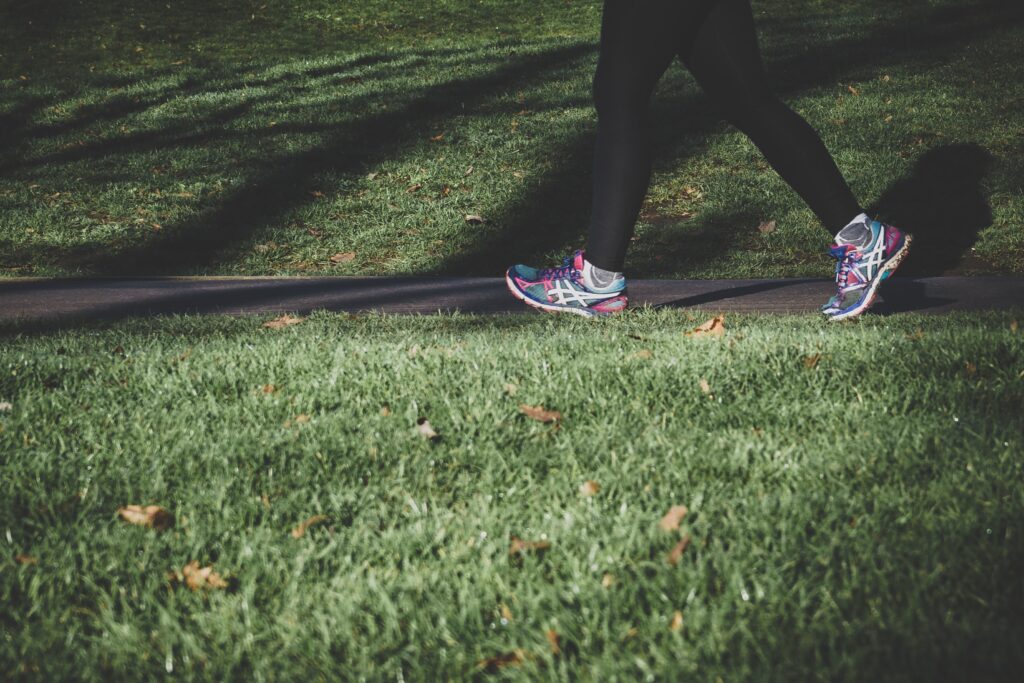 Full confession here:  I have an Inner Couch Potato and I listen to her a lot.  Especially when I think about getting out for some activity.

She often says sh#t like, “Oh, you’re so busy now – you can go tomorrow.”  Or “Are you sure it’s not too hot/rainy/cold/slippery/dark to go out?”.  Or “Hey – you hate running alone.  You’ll start up again once you find some running buddies.” Or “Just one more episode and then you can get sweaty.”

I love her – like who wouldn’t love someone who encourages you to cuddle up and binge watch the Great Canadian Baking Show (for the bazillionth time!).

But frankly, I also love those sparkly endorphins I get when I come in from a sweaty run.  And the bragging rights I claim when I say “I’m a runner”.  And the power I feel when I’m out in nature and the kilometres get easier and easier to cover.

I love all these things ‘way more.  And that’s why I am committed to staying active – sometimes running, sometimes walking, sometimes on my yoga mat or my spin bike.  Sometimes just dancing around my kitchen.

Even when my Inner Couch Potato tries to derail me.

I firmly believe that you cannot outrun your fork.  And while eating well is the foundation of good health and the number one thing you need to start with if you are looking to feel better, look better or live better, being physically active is one of the most important ways to maintain good health.  Long-term.  At any age or stage of life.

You don’t need to be a marathoner, but for most of us who have sedentary jobs – and frankly sedentary lives – we need to mindfully and consciously make it a habit to shake our booties and get in those recommended 10,000 steps a day.

That’s about 8 kilometres or an hour and 40 minutes of walking at an average stride.

What if I told you that new research shows similar health benefits are seen when people get as little as 7,000 steps per day?  Whoo hoo!  Cue the confetti if this makes daily walks seem more doable!

A group of American researchers recently published a study in the medical journal JAMA Network Open. They wanted to find out how many steps are associated with a reduced risk of premature death for middle-aged adults.  They gave 2,110 participants ages 38-50 a wearable activity monitor to measure their steps, then grouped participants into three categories:

Here’s the exciting part – this is a long-term study.  Researchers followed up with participants twice per year for several years afterwards (like more than 10.8 years, on average).

Researchers were interested to see how many people died prematurely (earlier than the US population mean life expectancy) and compared this to how many steps they took per day and how quickly they were stepping (ie: was it a stroll, a brisk walk or a run?).

They also accounted for a number of other factors such as smoking history, body weight and height, alcohol intake, diet (and rated it based on the Healthy Eating Index), fasting glucose, total cholesterol, blood pressure, and the medications that participants were using.

This was a solid study that gathered solid data.

The study found that people who took a moderate number of steps per day (7,000-9,999) had their risk of premature mortality reduced by 50-70% compared with those who took only 6,999 or fewer steps per day.

What’s also interesting is that those who took a high number of steps per day (10,000+) had almost the same benefit as the moderate group.  In other words, whether you take 7,000, 8,000, or even 10,000+ steps per day, you have a reduced risk of dying prematurely.  These findings were also consistent across racial groups and genders.

Does walking work as well as running?

The speed or number of steps per minute is called “step intensity”.  This study did not find that step intensity made any difference to the health benefits, although other previous studies have found that intensity may reduce heart disease risk factors.

In other words, middle-aged adults don’t need to sprint, or even jog, to reduce their risk of premature mortality.

Walking is as good as running – just move.  Every day.  Consistently.

The bottom line of this study is that middle-aged people (I’m raising my hand here and maybe you are too?)  should aim to get at least 7,000 steps each day to reduce their risks of dying prematurely.

Have trouble getting those 7,000 steps every day?

You might have your own tracking device – but if you want a copy of my BOOL 30-day Habit Tracker, just shoot us an email.